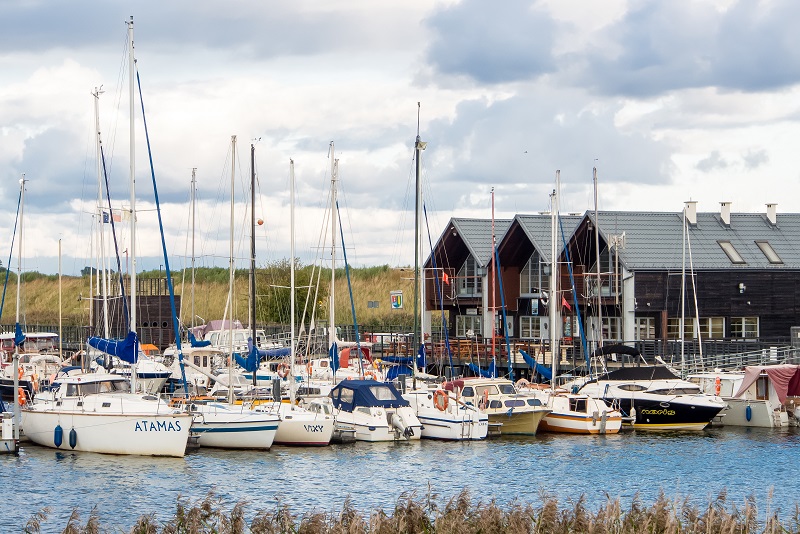 The kayaking route of the Martwa Wisła river starts at the Polski Hak peninsula and ends at the lock in Przegalina. This stretch can be dangerous for kayakers because of the heavy vessel traffic and waves associated with it.

The river is recommended for experienced kayakers. As the river current is not too strong, you can start your trip at any of the numerous marinas found in Gdańsk and its neighbouring towns and villages. The route itself is very wide, about 150 – 500 m. Backwaters in places. Watch out for the weather conditions, especially the wind. If strong, it is annoying. The Martwa Wisła (literally, the Dead Vistula) is the former main estuarial arm of the Vistula River. It became “dead” after the construction of the Przekop Wisły (Vistula Crossing) in Świbno and cutting it off from the main estuary with locks in Przegalina and Pleniewo. The latter was dismantled after World War II. The trip starts at the Imperial Harbour located in the former dockyard of the Gdańsk Shipyard. You paddle to the Polski Hak peninsula, i.e. an intersection of waterways: to the right, the Motława, which 1.5 km further will take you to the Old Town, behind your back, the Martwa Wisła, flowing through the shipyard areas, to the left, the Kaszubski Channel with its shipping route and seaport; to enter the port area, you need the permission from the harbour master’s office (on the way, you will see the Wisłoujście Fortress, the lighthouse in Nowy Port and Westerplatte); going straight on the Martwa Wisła, you will reach Przegalina. Initially, you go past the harbour wharves and the Siennicki Bridge. After passing the bridge, on your right, you can see the Opływ Motławy, i.e. the former city moat, which can take you to the Motława River. At this point the river is about 150 – 350 m wide. Further on, there is a railway and road bridge (cable-stayed, its structure and pylons dominate the neighbourhood). On the way, you pass several marinas, and further on, for almost 3 km, on your right you can admire the grounds of the refinery in Gdańsk. The next 1.5 km brings you to the point where the river narrows down to 51 m. Formerly, the Pleniewo lock used to be here. On the left, the Stocznia Wisła shipyard and the cove where a marina is located. You paddle out to a large backwater. The branch extending to the left is the Wisła Śmiała, the natural estuary of the Wisła created in 1840. About 2.5 kilometres from here you can reach the Baltic Sea. On the left bank there are numerous marinas and yachting harbours in the Górki Zachodnie district. It is an important place on the map of Polish sailing. Now you approach Sobieszewo; there is a drawbridge in front of you and another marina hidden in the reeds on your right. After passing the bridge, on your right, you can see a heap: an almost 50 m high mountain of phosphogypsum produced during the manufacture of phosphate fertilisers in the nearby plants located in Gdańsk. The heap is partially reclaimed, with landfilling having been terminated in 2009. You go past the marina in Trzcińsk. In front of you, the river is wide, with flood embankments and historic arcade houses on the banks. You arrive at the lock in Przegalina. The southern lock chamber is used for locking ships and yachts, while the northern chamber is closed. Icebreakers are stationed in it. Beyond the lock, the Vistula awaits you. A route for the brave, due to the fast current of the river. You can continue the trip to Błotnik along an old branch of the Vistula River. You paddle about 2.5 km through a wide backwater and at the end of the dead-end branch you will find the modern marina in Błotnik. 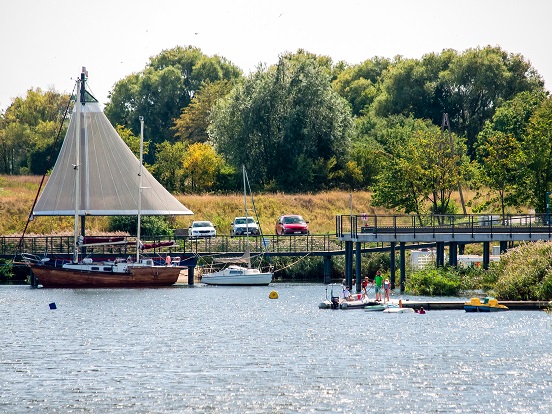 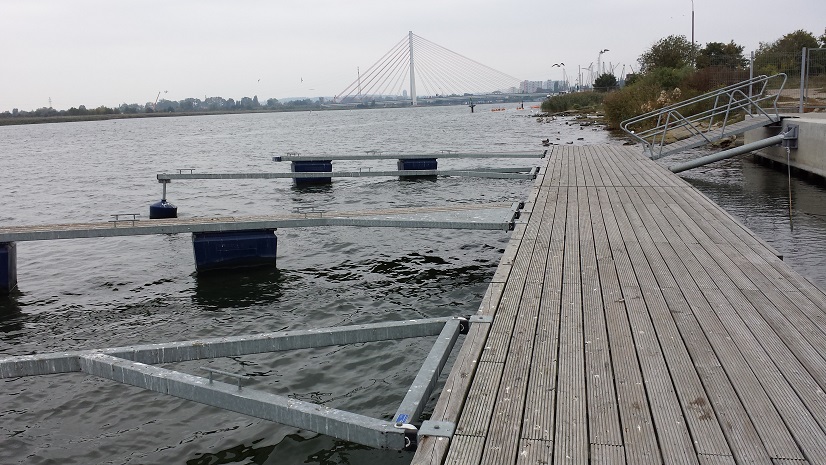 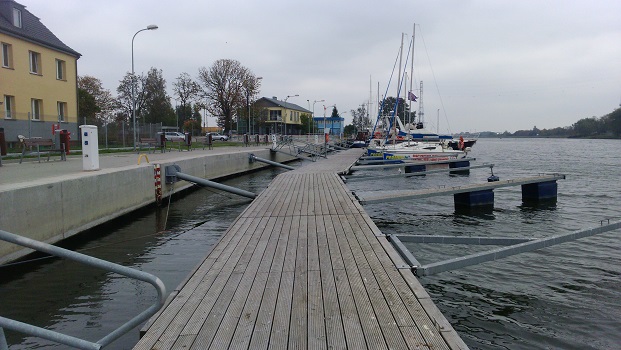 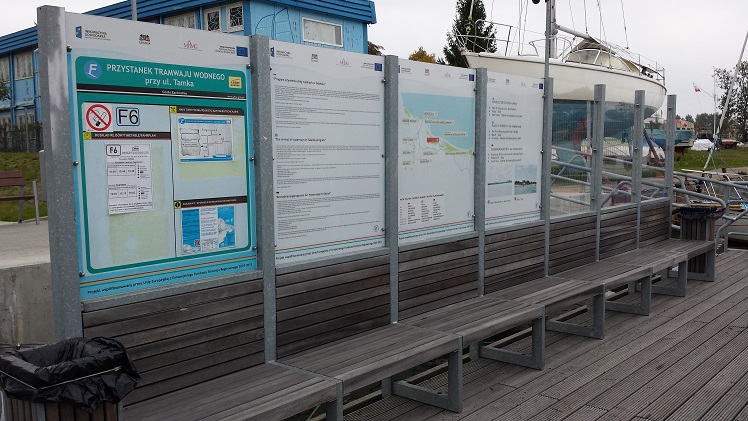 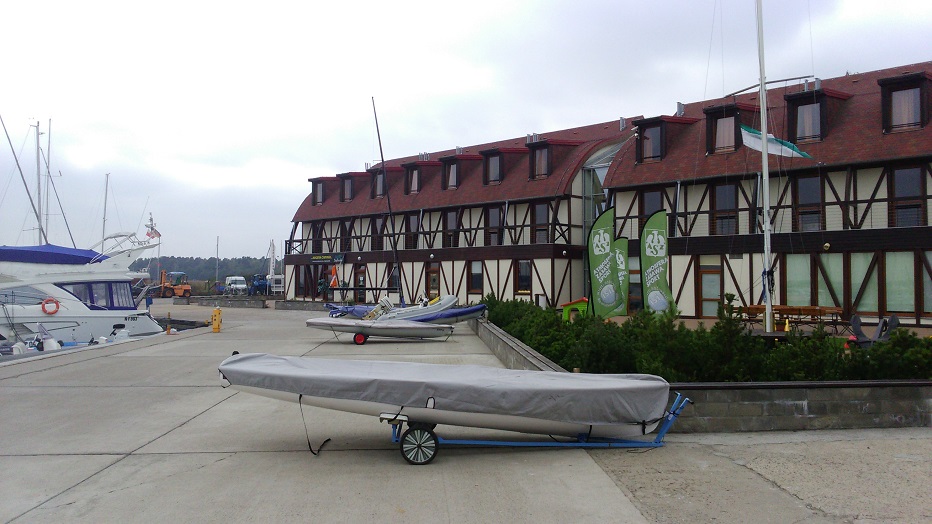 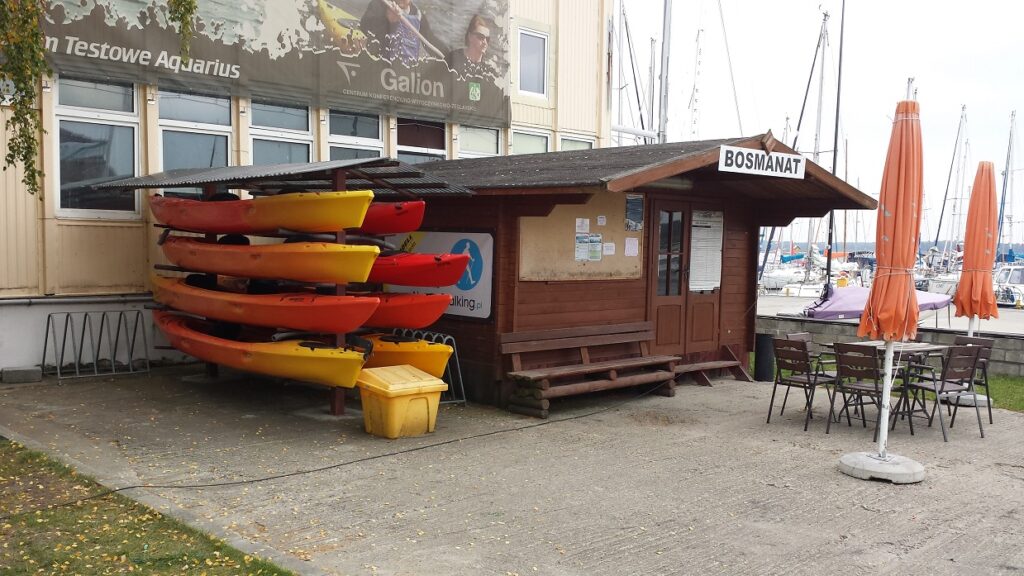 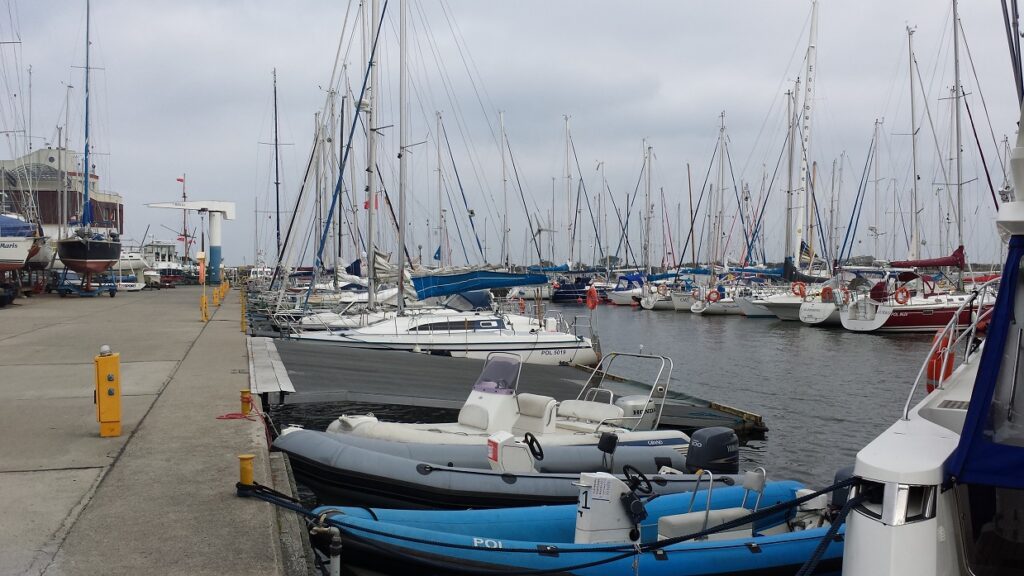 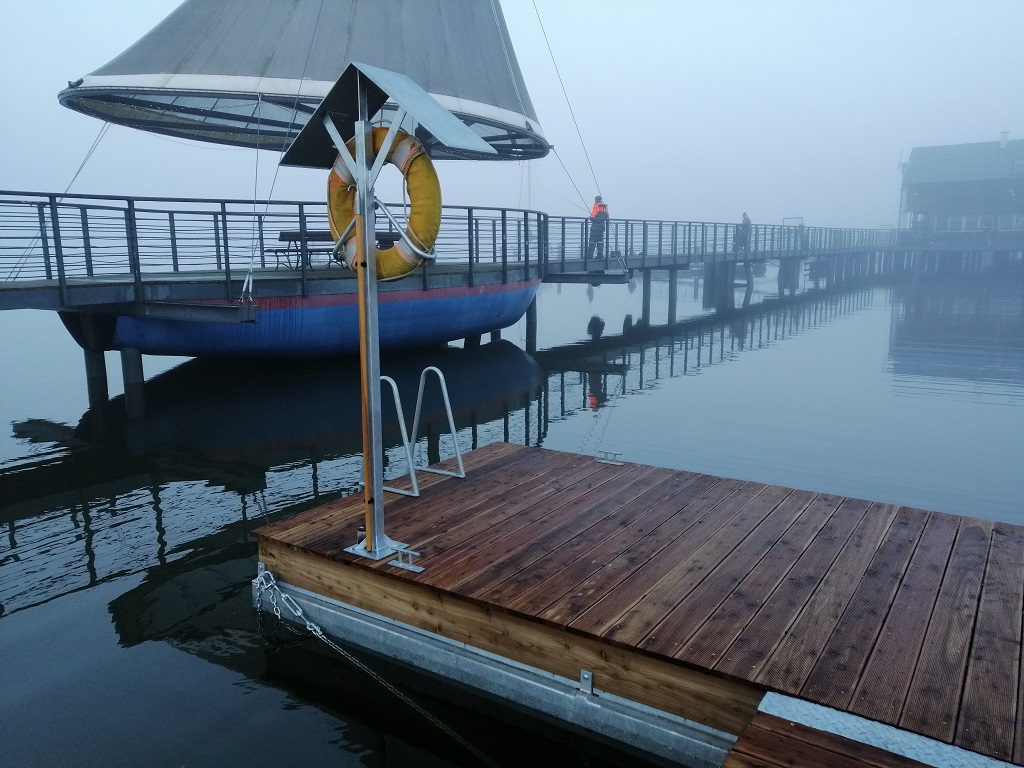 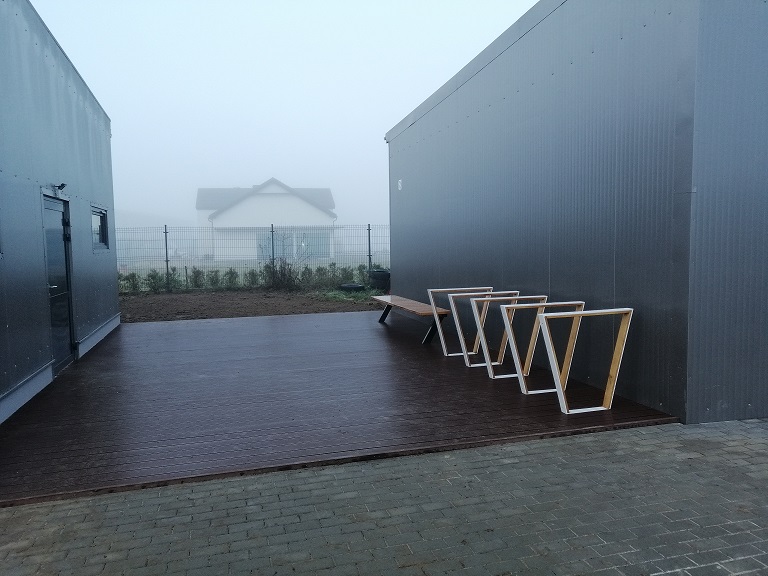 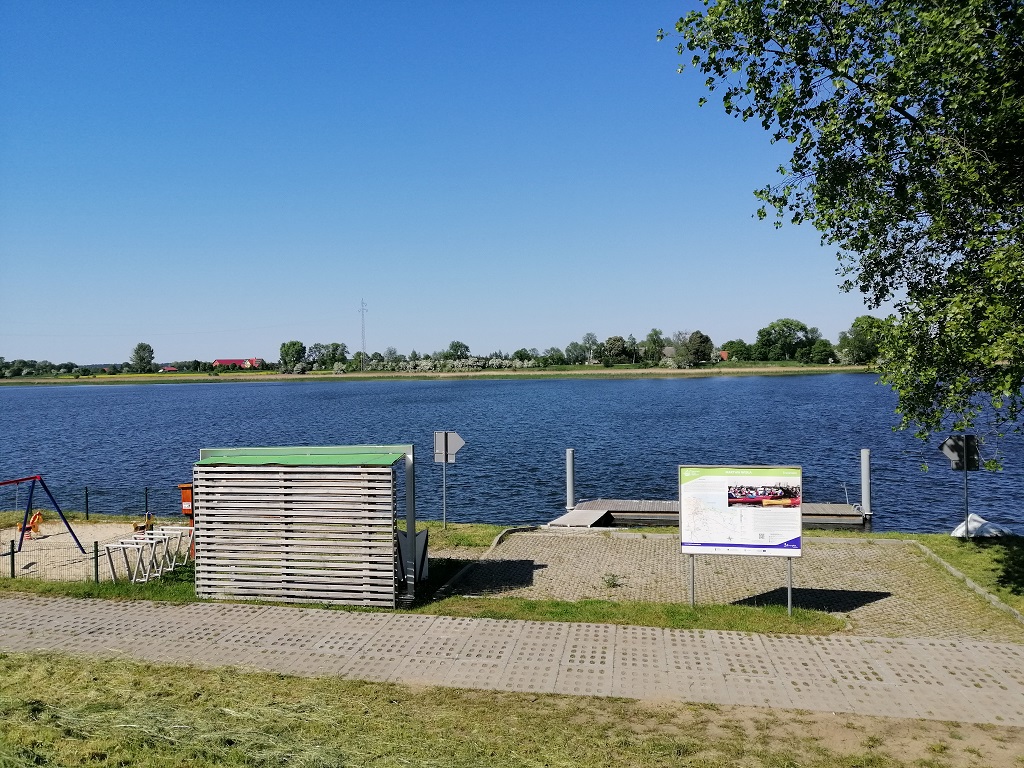