Through Żuławy to Gdańsk in a kayak
Motława 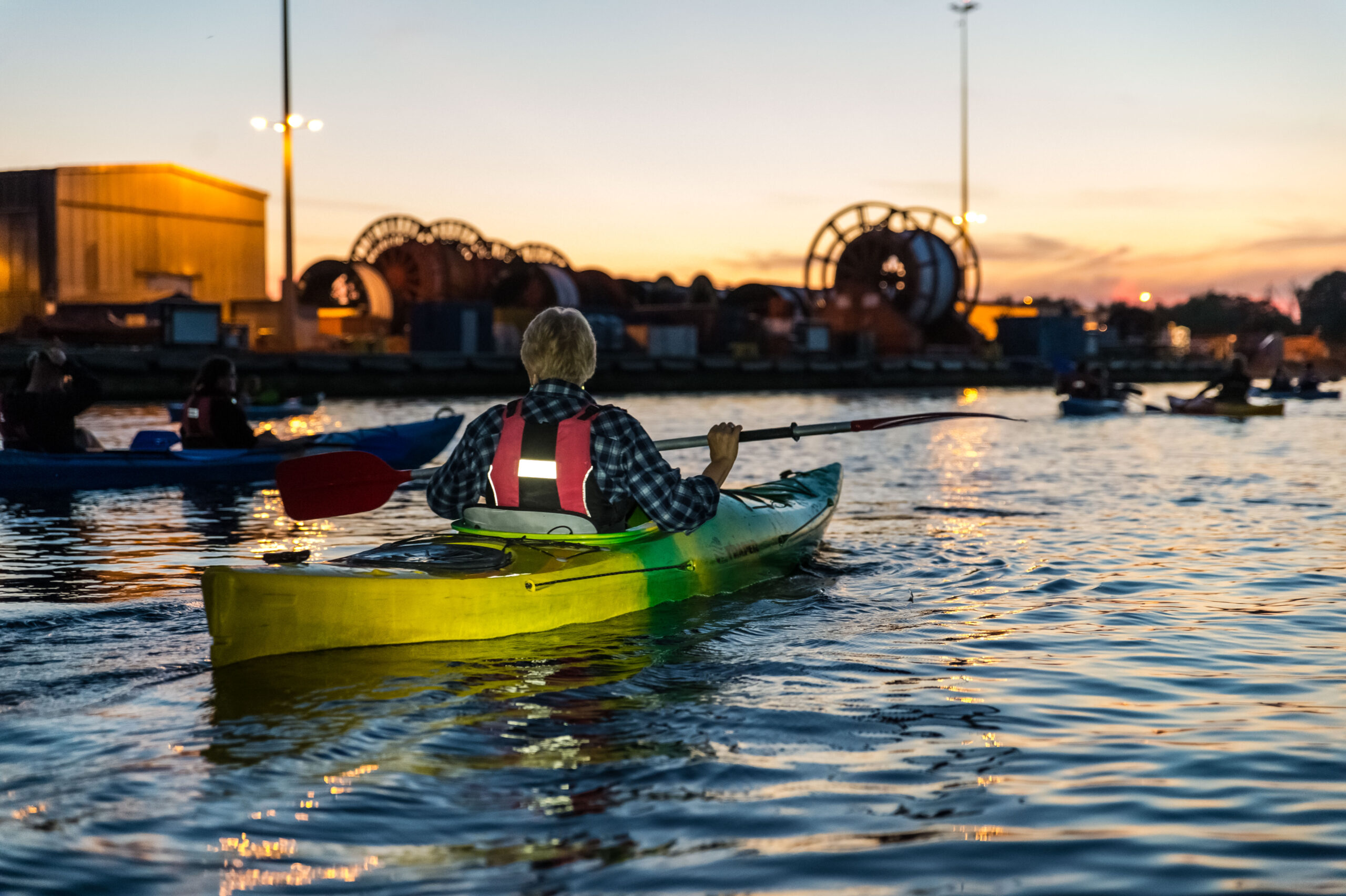 1. Kamienna Grodza – A historical hydrotechnical construction from the beginning of the 17th century separating the internal waters of Gdańsk to 2. Opływ Motławy. It was used to direct the waters of Motława into moats from the south, allowing to cover the foregrounds in case of a siege.
2. Opływ Motławy – This artificial canal with a unique shape is nothing else but an old urban moat of monumental fortifications which efficiently protected Gdańsk for nearly two centuries. Two initial bastions have been preserved, with their great green barrows towering over the cityscape.
3. Wróblewo – A village located on the Motława water trail. Its shore includes a charming wattle and daub Assumption of Mary church from the end of the 16th century. It is one of the most beautifully located churches in Żuławy.

Motława is a river in Żuławy with its spring near Tczew. Due to the very slow and almost undetectable current it is possible to travel in both directions which makes it possible to kayak from Gdańsk to Wróblewo and then back. In its first part Motława branches off into Stara Motława and Nowa Motława, Canal on Stępka, as well as Opływ Motławy, and surrounds the monuments of Gdańsk forming the Spichrzów and Ołowianka islands. This part of the trail constitutes separately described internal waters of Gdańsk.
The proper Motława river begins by the old mill (Kamienna Grodza), behind the flood protection gates which open and close depending on the water level and wind direction. Therefore, one has to prepare for the possibility to carrying the kayak at this location. From this point the river flows surrounded by flood banks through the flat agricultural areas of Żuławy Gdańskie. In Krępiec it takes on the waters of Radunia and goes south through such villages of Żuławy as Wiślina or Lędowo. It is best to end the kayaking by the picturesque historical church in Wróblewo located by the very water. A low-key resting spot is located by the church and river. 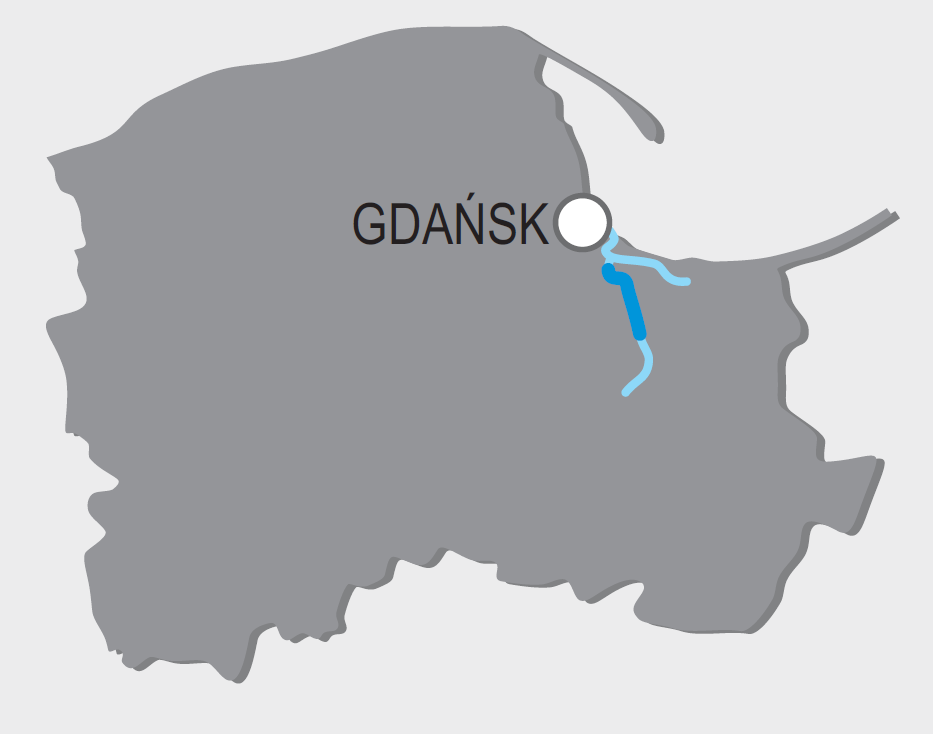 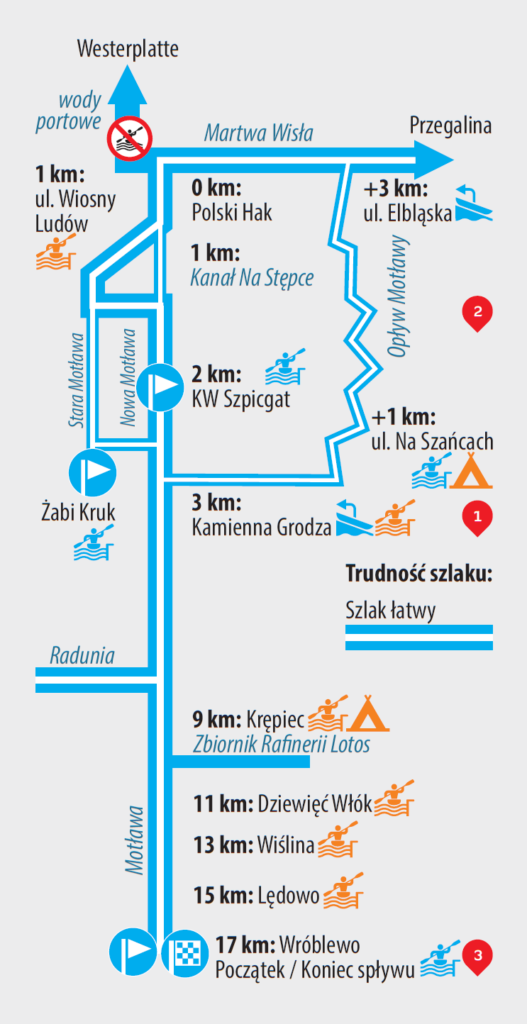 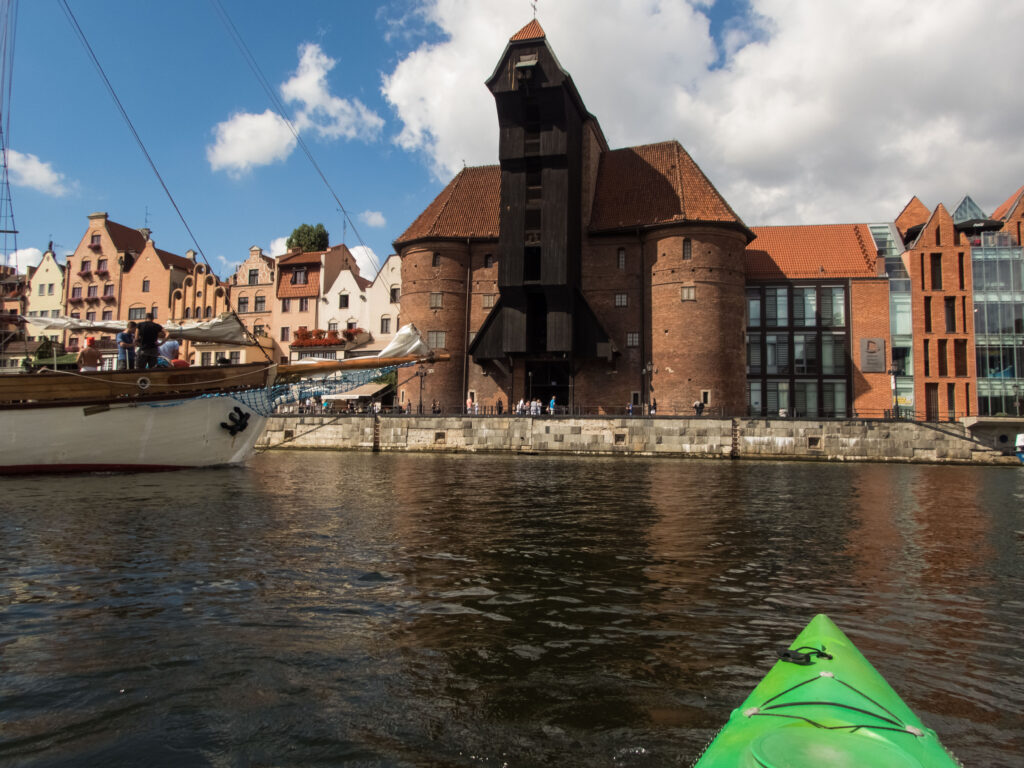 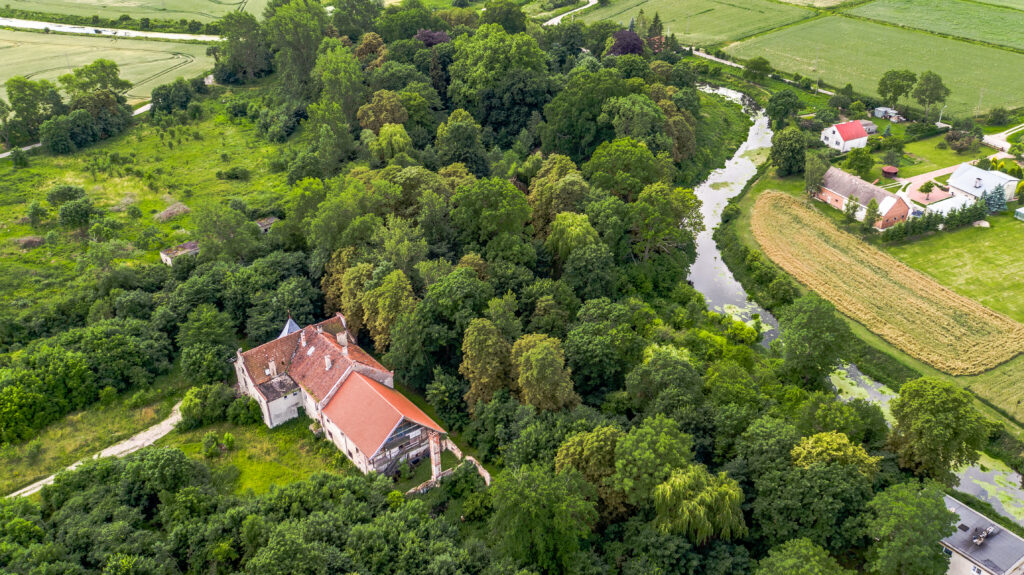 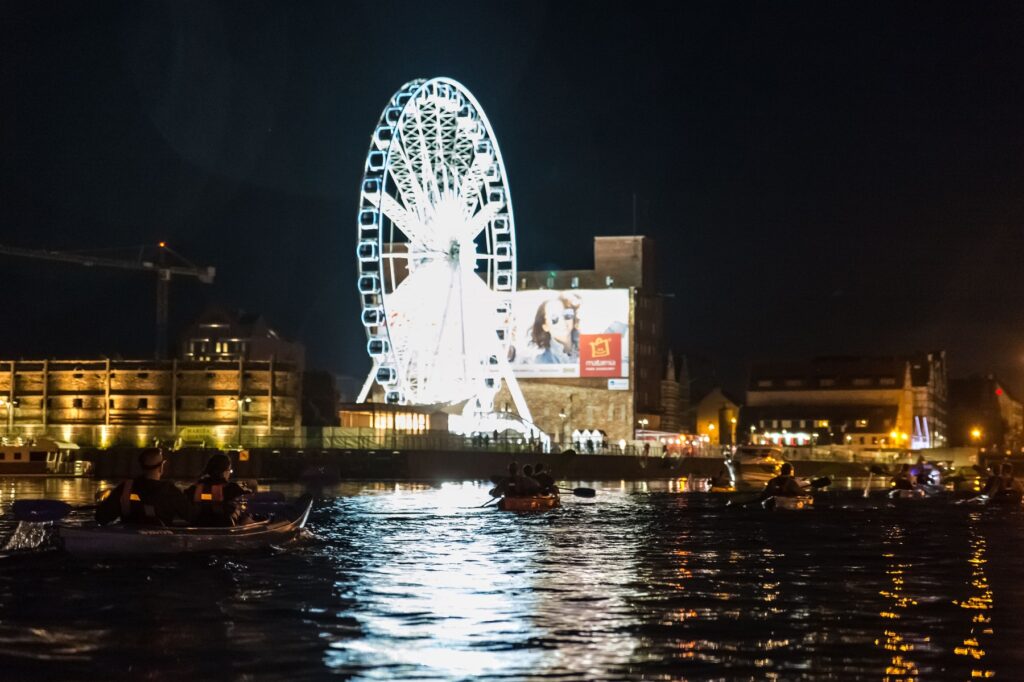 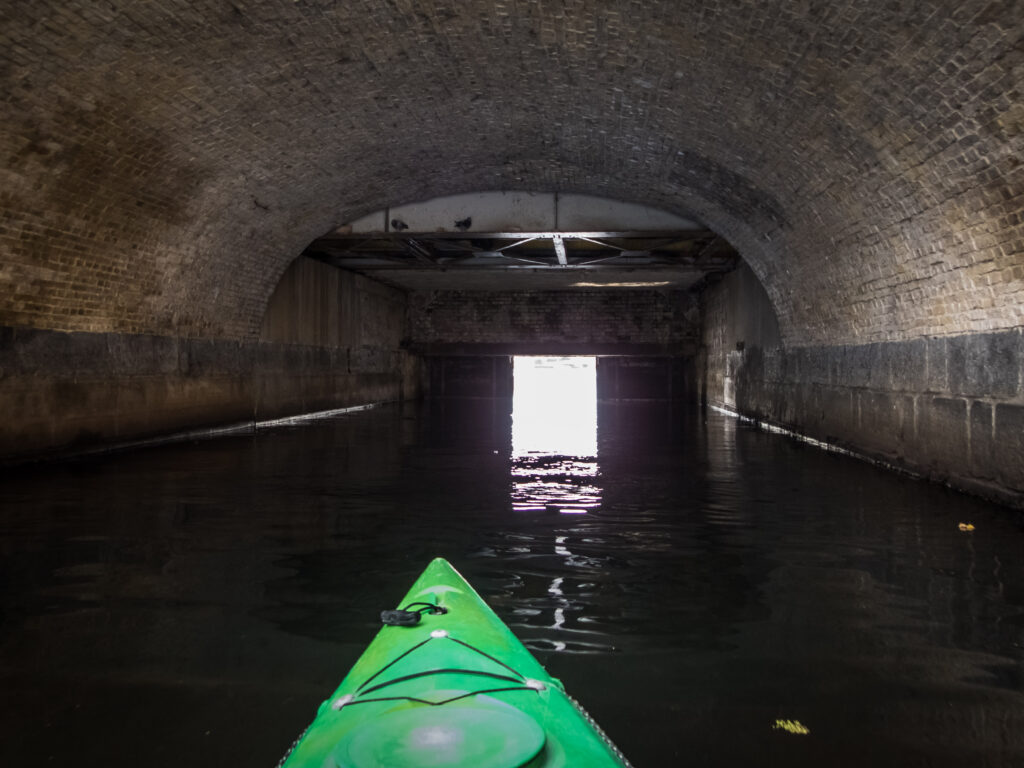 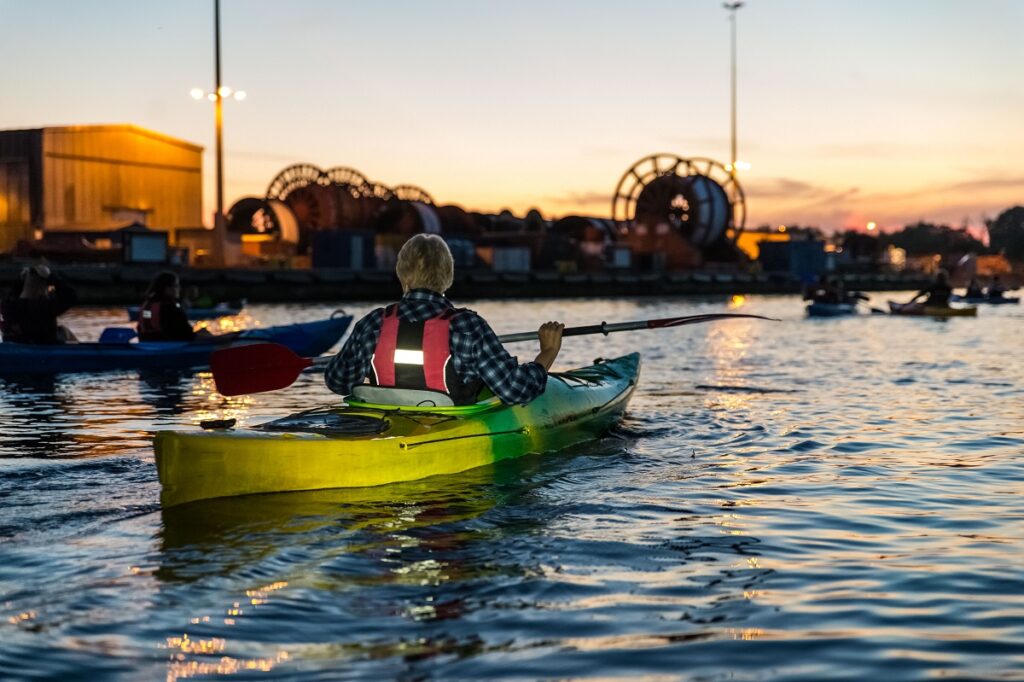